If My Business Is Damaged In The Protests, Will Insurance Help Me?

Home » If My Business Is Damaged In The Protests, Will Insurance Help Me? 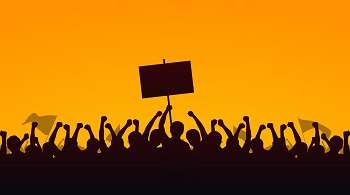 2020 has not quite been what we had anticipated.

Starting it off with devastating wildfires in Australia, to the global pandemic due to COVID-19 and a rumor about killer wasps on the loose, it has been a rough year to say the least. With the death of George Floyd, a global movement started in which Black Lives Matters protesters have taken to the streets worldwide to protest systematic racism within our country. While many protests have been peaceful, others have not – resulting in damage to various businesses and communities both in Oklahoma and nationwide. While this crucial conversation continues, the protests will go on as our country works toward change. With all of that, many businesses have been left to figure out how to continue with business after damage has occurred.

How Is Insurance Going To Classify Damage From The Protests?

Insurance companies always have their own language when it comes to reasons for claims. This can often be confusing when you are reading a policy trying to figure out what coverage goes where. In the case of protests, if you were to look for that word, you’re probably not going to find anything. Instead, typically, insurance companies will classify it under the term “Riot” or “Civil Commotion.”

If My Oklahoma Business Is Damaged Or Looted Due To Protest Is It Covered?

The simple answer is yes – if you have a standard property policy. The hard part is that all policies are not created equally. Many businesses are written on a policy that packages together all their coverages – such as General Liability, Property Coverage, and perhaps auto or equipment. This is called a BOP (business owner’s policy.) On the standard business owner’s policy, things like damage to your property, looting, business interruption, and even vandalism are often covered under the Property Coverage. Keep in mind, you have to have property coverage in order for this to apply. This would not apply if you don’t carry such coverage.

Since coverage depends on the type of coverage you bought, then the items being replaced will depend on the policy as well. If you don’t own or insure the building, then your policy will not pay for property damage to the building. The landlord is responsible. But if you’re a tenant and there’s damage or looting of your equipment or improvements to the space, then your insurance could help out.

If I Must Close My Business Due To Damage Is There Help On The Income I’ve Lost?

There is a coverage called Business income insurance — also known as business interruption insurance — it could cover lost income if the business is forced to suspend their operations or limit hours due to rioting. However, this is only triggered if the business’ premises are physically damaged. It’s also important to note that not all policies have this coverage so it may not apply.

Instead of deductibles, business income has a waiting period. This is typically somewhere between 48-72 hours that a business must be closed before this coverage will kick in.

Why Wouldn’t A Policy Cover Me For Damage Due To Protests Or Riots?

As previously mentioned, not all policies are created equally. Often, we find that the policies that seem like a great deal appear this way because policy wording is not as broad as other policies. It can also be because of the type of business that you are doing. Insuring a florist is always going to be less expensive and a lower chance of risk then insuring a dynamite manufacturer. With businesses that have high risk, often the insurance companies that will look at those will not have as broad of coverage as the mom and pop shops on Main Street.

Be aware if you’re renewing your Oklahoma business policies during this time. We have seen many companies throw in exclusions for this type of coverage since there is a great chance of loss right now.